A FILM EXPLORING THE REAL COST OF PRIVATIZING
AMERICA'S PUBLIC SCHOOLS
"Everyone who values democratic education needs to see this."

-- Jonathan Kozol, Advocate for children and author of Savage Inequalities

"This film tells a cautionary tale that is real. It's present."

NARRATED BY MATT DAMON
WATCH THE TRAILER GET INVOLVED

Join the more than 3,000 groups, institutions and individuals from around the U.S.—and the globe—who have contacted us about screenings! Click below to find out how you can bring the film to your campus or community. 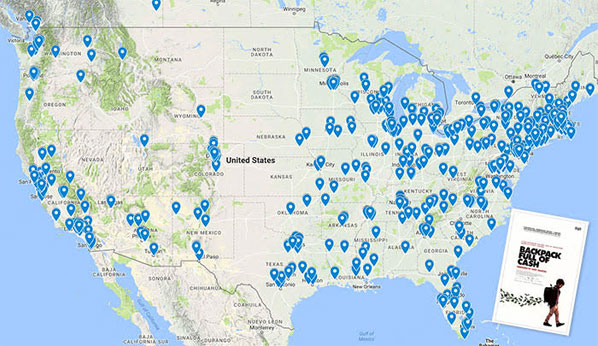 Narrated by Matt Damon, this feature-length documentary explores the growing privatization of public schools and the resulting impact on America’s most vulnerable children. Filmed in Philadelphia, New Orleans, Nashville and other cities, BACKPACK FULL OF CASH takes viewers through the tumultuous 2013-14 school year, exposing the world of corporate-driven education “reform” where public education -- starved of resources -- hangs in the balance.

MORE ABOUT THE FILM » WATCH THE TRAILER » MEET THE TEAM »

In many places, public education is at a tipping point. Leaders in Washington are calling for a massive increase in funds to expand privately-run charter schools and vouchers. Now is the time to join the movement to stop privatization and strengthen public schools.

SHOW 'BACKPACK'!
Host a screening in your community or buy the film for your educational institution. Film can be a formidable tool for bringing people together, sparking discussion and driving change.
LEARN MORE »
EXPLORE ISSUES
Connect with groups working to support and strengthen public schools that serve all students equitably. Learn more about the issues involved.
LEARN MORE »
DONATE
BACKPACK can spark discussions and pave the way for meaningful change. Help fuel our nationwide community engagement campaign!
LEARN MORE »

Here are some of the individuals who were interviewed for BACKPACK FULL OF CASH, and whose impressive work we drew upon in making our documentary film.
DAVID KIRP
Dr. Kirp is a professor of Public Policy at U.C. Berkeley. A well-known journalist whose articles regularly appear in the New York...
Read more
DIANE RAVITCH
Former U.S. Assistant Secretary of Education, historian and public intellectual, Ravitch is the author of numerous books about education...
Read more
KARRAN HARPER ROYAL
Harper Royal is a New Orleans parent and public school advocate. She is Assistant Director of the Pyramid Community Parent Resource...
Read more
LINDA DARLING-HAMMOND
An international researcher and education policy analyst, Dr. Darling Hammond currently serves as President & CEO of the Learning...
Read more
HELEN GYM
A Philadelphia City councilperson, Gym is the first Asian American woman to hold that position. She is also a community organizer,...
Read more
RHONDA BROWNSTEIN
Legal Director of the Southern Poverty Law Center, Brownstein formerly served as Executive Director of The Education Law Center of...
Read more
OTIS HACKNEY
Chief Education Officer for the City of Philadelphia and an advocate for Community Schools, Hackney served as Principal of South Philadelphia...
Read more
VIEW ALL »

Matt Damon is an Academy-Award winning actor, film producer and screenwriter. He is also an advocate for public schools. Matt’s mother, Dr. Nancy Carlsson-Paige, is an expert on early childhood development and author whose books include Taking Back Childhood: A Proven Roadmap for Raising Confident, Creative, and Compassionate Kids.

“I got involved in BACKPACK FULL OF CASH because I believe that every kid should have access to great public schools. I got a great education in public schools and my mom is an educator so I know just how hard teachers work every day.”

Check to see if there is a screening near you. If not, click here to find out how you can host a screening and bring BACKPACK to your community.


People working together are the best force for change.
Sign up here for useful updates, helpful suggestions, and great resources for strengthening public education in your community.